Did you know that one of the consequences of being exposed to tapeworms during development (at least in rats) is better memory?  Prof. Williamson’s recent results have been covered by Science magazine, highlighting the fact that her work on the links between the immune system and the brain are an exciting field!

To find out more about what’s up with Neuroscience at Williams (and neuroscience in general), visit the program’s facebook page!

efore spring break (instead of during the break as it so often does), in the week of March 16-22. The stars were aligned, and Lauren Williamson, Visiting Professor of Neuroscience (and class of ’07) took the initiative to plan ahead and organize (and coordinate, run, and otherwise mastermind) a series of events under the Neuroscience Program’s aegis.

There was a talk on the neural bases of empathy, by Heather Williams, at the Purple Pub. 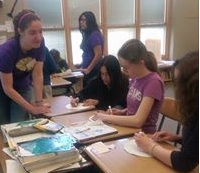 And there were activities for the Williamstown Elementary School 6th grade classes, here led by Williams neuroscience concentrators Alejandra Moran ’17 and Kathryn McNaughton in their spiffy Brain Awareness T-shirts.

Teaching Beyond the Classroom

At Williams, it’s not uncommon for students to grab a cup of coffee with a professor or drop by their office just to chat. A recent retirement celebration for longtime Williams College Professor of Biology Steven Zottoli poignantly demonstrated the long-term impact that such actions can have on the lives of both students and professors, and the way that small schools like Williams encourage such community-building.

Zottoli, known to students as Dr. Z, arrived at Williams in 1980 as an assistant professor. Eager to focus on both teaching and research, Zottoli saw the position at Williams as his “dream job.” Over the course of his career, he taught biology and neuroscience classes, carried out research on spinal cord regeneration in goldfish, and brought numerous students to work with him at the Marine Biology Laboratory in Woods Hole, Massachusetts.

Thirty-four years and hundreds of students later, Dr. Zottoli retired from his formal teaching responsibilities at the end of the fall 2013 semester. At the invitation of the Williams Neuroscience Program, more than a dozen alumni came from across the country to spend a recent Saturday honoring their former professor. Seven of these students spoke in front of an audience of alumni, faculty, and current students about the ways in which Professor Zottoli helped to shape their lives. Their speeches painted a picture of a man who values teaching both inside and outside of the classroom and who helped to build a close community at Williams.

The returning students all spoke about Zottoli’s impact on them intellectually. Many of them worked in his laboratory as honors thesis students. Don Hangen ’82, Zottoli’s first thesis student, discussed Zottoli’s role in his development as a scientist. Working with Zottoli, he learned how to conduct hypothesis-driven research, write scientific papers, and develop research grants. “As a student, it was a maturing process for me to work with Steve,” he said. “I think he saw more potential in me than I saw in myself.”  Heather Rieff  ’93, another former thesis student, agreed: “Steve pushed us to be independent scientists from the first time we started working with him.” While Rieff transitioned away from research after receiving her Ph.D. and is now working in science policy at the National Institute of Neurological Disorders and Stroke, she noted, “It was never because I lacked the confidence that I could succeed [in research].”

Zottoli mentored even seemingly unlikely scientists. Grae Davis ‘89, a Williamstown native who started college convinced he would end up as an English professor, connected with Zottoli serendipitously. Davis recalled a day in which he was bored during his required introductory biology lab: “I walked into Steve’s animal physiology class across the hall, and there was a beating heart on the table. That was the hook that brought me in.” Instead of immersing himself in Chaucer and Dickens, Davis pursued a senior thesis in Zottoli’s laboratory and now is the chair of the Department of Biochemistry and Biophysics at the UCSF Medical School. “It’s been an accidental journey,” he said, “but one that’s been really fun.”

While Zottoli inspired many former students to pursue science, pushing them towards a particular career path has never been his goal. Rather, he describes his style of teaching and mentoring as “constructively confusing people.” While some professors might simplify a topic to make it easier for students to digest, Zottoli strives to present ideas in all their complexity. Students may initially be frustrated, but by being forced to struggle through a difficult lesson, they come away with a deeper understanding. The same philosophy of constructive confusion extends to his personal interactions with students: he wants to make them think hard about their choices, away from the pressures exerted by family, peers, and society. “I may have constructively confused them enough that they backed away from the preferences imposed by other people. As long as I do it in a kind, compassionate way, I think I’m doing my job.”

It is this interest in helping students personally, not just professionally, that has made Zottoli such an important mentor and friend to his students. Biniam Gebre ’00, who recently accepted a position as the General Deputy Assistant Secretary at the Federal Housing Administration’s Department of Housing and Urban Development, admitted that Biology 102 with Dr. Z was “[his] least favorite class at Williams.” Having “bombed a quiz”, he said, he went to talk to Dr. Z. Zottoli examined his notebook and, according to Gebre, “declared with brutal honesty that [he] ‘took terrible notes and didn’t know how to study.’” Despite Zottoli’s criticism of Gebre’s study habits, however, the two developed a close friendship. Gebre cited one instance in which Zottoli showed up at his apartment in Williamstown unannounced with a bicycle for Gebre’s younger brother, who was living with him at the time. That act of kindness “was the start of a real connection between my brother and Dr. Z,” said Gebre. Even years after graduation, alumni frequently call Zottoli to ask for advice—or simply show up at his house. Robert Adamo ’01, an interventional radiologist at UMass Worcester, described Zottoli as “one of the most incredible listeners [he’s] ever encountered.” He shared an instance in which he was faced with a difficult decision and his wife said to him, quite seriously, “It seems like you need some good Zottoli time.”

Numerous alums also emphasized their relationship with Zottoli’s family, citing time spent having dinner at the Zottoli house or relaxing on the beach with them at Woods Hole. “When I look at my family now, part of what I’ve modeled it on is the Zottoli family,” said Hangen. Similarly, Gebre credits Zottoli and his wife, Doe, with providing an inspiration and a source of support for his own marriage.

Most student-professor relationships are one-directional, with the older mentoring the younger. But Zottoli sees many students, both former and current, as friends who give as much to him as he does to them. Case in point: Don Hangen received an M.D. from Stanford University and interned in orthopedics at Massachusetts General Hospital. When Zottoli needed a hip and knee replacement, he contacted Hangen to ask whether he would be comfortable performing the surgery. “I felt he’d listen to me in my stubborn, persistent manner, and I completely trusted in his abilities,” Zottoli said. And while other alumni may not have made such concrete contributions to his life—you only need so many knee replacements, after all—he still equally values his relationships with them. “I’ve gained an incredible extended family out of [my time at Williams],” he said.

Zottoli emphasizes that the environment at a school like Williams is conducive to developing the types of relationships that he has fostered over the years. When he first came here, he said, “[he] really had no deep understanding of what a community was—beyond the classroom, how important the interactions were.” But the culture of cooperation and collaboration at Williams inspired him to do the same with his own students. “It’s less me, and more what the college provided me with,” he insists.

His former students made it clear that Zottoli’s emphasis on relationships and people affected them not only during college, through home-cooked meals, lab group footraces, and career advice, but also throughout their adult lives. For them, Zottoli is a friend, a source of inspiration, and a model on which to base their own personal lives. But Zottoli, as always, gives the students their due credit: “If I went to their retirement celebrations, I’d stand up and say: ‘I have received more from my students than I have given to them.’”

Covid-19 is an ongoing concern in our region, including on campus. Safety measures are in place, and campus community members and guests are additionally advised to take personal precautions. See the college's Covid-19 website for information about campus policies. For the latest research and recommendations from the CDC, visit cdc.gov/coronavirus.
MENU